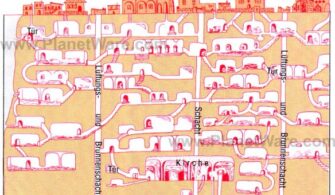 The ancient city of Tlos, which lies on the east side of the Xanthos valley, is one of the most important and oldest settlements in the Lycian Region. The city is mentioned as “Dlawa” in the Hittite documents of the 14th century BC, and as “Tlawa” in the Lycian inscriptions.

The only temple dedicated to Kronos in Anatolia is located in this ancient city. In addition, mythological hero Bellerophon is estimated to have lived in this city.

The ancient city of Tlos, one of the most important Lycian cities in the Xanthos Valley, was included in the UNESCO World Heritage Temporary List on 6 February 2009.

Tlos is located in the Seydikemer District of Muğla Province.

Archaeological remains unearthed in the region indicate that this city was inhabited during the Bronze Age and Chalcolithic Period. The settlement, which started with the Neolithic Period in Tlos and its immediate surroundings, continued until the Iron Age.

While the city was an independent member of the Lycian Union, it lost its independence when the Persian armies under the leadership of Harpagos invaded Lycia in 540 BC and remained under Persian rule until 333 BC. Alexander the Great ruled Lycia in 333 BC. After Alexander’s death, the city changed hands between Antigonos, Ptolemy, Seleucus and Rhodes, respectively.

With the recognition of the independence of Lycia by the Roman Senate in 168 BC and thus the formalization of the Lycian Union, Tlos became a member of the Lycian Union. The ancient city of Tlos is one of the six largest cities of the union with three votes, such as Xanthos, Patara, Pinara, Olympos, and Myra. In 43, the Roman Emperor Claudius transformed the Lycian region into a Roman province. During this period, Tlos maintained its importance in the union and continued to carry the title of Metropolis.

This religious importance of Tlos, one of the most important episcopal centers of Lycia during the Christian period of the Roman Empire, has been documented with archaeological finds. As a result of the weakening of the sovereignty of the Byzantine Empire in Anatolia, the region where Tlos was located was under the control of the Turkmen Principalities. The region then came under the rule of the Ottoman Empire.

Buildings in the Ancient City of Tlos

Tlos Theater, which is one of the monumental structures of the city with its original architectural form, was built at the foot of the slope located on the east side of the ancient city center. This theater is considered to be one of the major theaters of the Lycian Region with its three-storey stage building and two-stage cavea. The cavea, divided into two by a large diazoma, has a total of 36 rows of seats.

The general architectural structure of the theater and the earliest restoration inscription dated to the 1st century BC suggest that the theater was built during the Hellenistic Period.

The agora, which was built on a large plain just west of the theater, contained two-storey shop structures. It is estimated that the ground floors of these shops were opened to the flats of the stadium through the gallery with columns used as a street. It is estimated that the second floor of the shops is open to the agora on the upper terrace. The architectural remains found on the surface and thought to belong to the Agora suggest that the building was built in the 2nd century AD during the Roman Empire.

It is estimated that the Acropolis elevation, considered the center of the ancient city of Tlos since it contains settlement traces from ancient times, has been inhabited since the Classical Period. On the slopes of the hill, there is a necropolis consisting of a small number of Lycian sarcophagi and flashy rock-cut tombs.

During the Hellenistic Period, stadium, bouleteron, and Prytaneion structures were built on the eastern hillside of the Acropolis. It is understood that these buildings continued to be used during the Roman Period.

Ali Ağa, an Ottoman feudal lord, built a mansion in the 19th century at the summit of the Acropolis using ancient ruins.

The Grand Bath, which consists of three spaces arranged side by side and connected by a door passage, is called the Great Bath because of its size. Built on the slope to the southeast of the city center, this bath is considered a typical Lycian bath in terms of architectural features. The frigidarium section in the east of the bath was used as the entrance. The tepidarium section of the bath passes through two gates in the middle of the western wall of this section. At the western end of the bath, there is a caldarium.

The building has seven entrances and is also called the Seven Gates.

Changes were made in the structure of the bath in the periods after it was built. In the 11th century, a small church was built on a part of the tepidarium. The Caldarium section was transformed into the narthex of this church. Meanwhile, the frigidarium was converted into a cemetery.

Architecturally reminiscent of the cross-shaped basilica of Anatolia, the City Basilica is located on the East-West axis. There are abscesses on the east side and narthex and atrium sections on the west side.

The architectural structure of the basilica, which was built in the early Christian period, is presumed to be from the Middle Byzantine Period. During the Byzantine period, a chapel was added to the south wall of the building.

This temple, which is understood to be dedicated to God Kronos, according to the epigraphic finds, consists of two places: Pronaos and naos. The temple, which was dated to the second half of the 2nd century AD due to its architectural features, was positioned in a north/south direction. Built on a platform measuring 15.67 x 7.78 m. and in the Corinthian architectural order, the temple has a ‘teplum in antis’ plan.

Some of the materials of the temple were used for the construction of the City Basilica. The podium, the crepe row, the stairway leading to the pronaos and the foundation filling of the temple have survived. The so-called Small Bath (Küçük Hamam) or Gymnasium Bath consists of three main places: frigidarium, tepidarium, and caldarium. However, unlike the Great Bath, these sections are not ordered.

Although it is difficult to determine the first construction date of the building due to differences in the wall architecture of the bath, archaeological finds indicate that the first building phase of the bath was in the Early Roman Period.

The bath, which used the wall and floor heating system, then underwent various repairs.

One of the most interesting points of the city is the Necropolis area. The temple tombs carved into the rock-cut on the slope where Tlos castle is located are remarkable. The Necropolis, which is located on the slopes of the elevation where the acropolis is located, has been used since the Classical Period.

There are sarcophagi and rock-cut tombs in the necropolis area. A small number of sarcophagi are covered with semerdam (two triangular side faces of the roof). Some of the sarcophagi have been used with triangular pediment covers since the Roman Period.

Rock-cut tombs, which constitute the largest group among the grave monuments that survived in the necropolis area, were built by carving the bedrock. These tombs, which mimic the wooden house architecture of the Lycian Region, stand out with their flamboyant façade arrangement. Some monumental rock-cut tombs mimic the façade of a temple.

The most spectacular of these rock-cut tombs is the tomb monument of Bellerephontes, in which the winged horse Pegasus was depicted fighting the three-headed monster Chimera.

According to the mythology, the goddess Athena gave Pegasus the winged horse to Bellerophon, who went to fight the beast that sprang from his mouth. Bellerophon, who reaches heights beyond the monster’s flames thanks to Pegasus, killed the monster with his arrows. After this success, he married the daughter of the King of Lycia and became the heir to the throne. As time passes, Bellerophon is proud of its success and even tries to go to Olympos one day. This situation makes Zeus very angry. Zeus inflicts a horsefly to Pegasus which Bellerophon rides. As soon as this fly bites, the horse throws Bellerophon off. Bellerophon falls to the ground at great speed and lives as a disabled and blind person cursed by the gods for the rest of his life.

It is estimated that the first form of the Stadium, which is located on the eastern hillside of the acropolis, was built during the Hellenistic Period, and later some repairs and additions were made. The stadium, which was built by carving from the bedrock and arranged as a one-sided seating tribune, consists of a parapet wall and nine rows of seats. Only 148 m of the row of seats have survived intact.

In the middle of the Stadium Area, there is a pool with a depth of about 1 m and a fountain just in front of the pool. This indicates that this area may have been used not only for stadium purposes but also for other social and religious activities.

The Stadium Area is surrounded by a U-shaped columned gallery in the north, south and east directions.

Archaeological findings indicate that this cave near Tlos (5 km north) was inhabited during the Mesolithic Period in the 9th millennium BC. Therefore, the first settlers of the cave are thought to be people of hunting-gatherers. The Girmeler Cave is also one of the few settlements that gave traces of life during the Neolithic and Chalcolithic periods on the Mesolithic settlement in the west of Anatolia. The cave has 2 separate entrances, each of which is magnificent. The settlement area of ​​Girmeler Cave consists of two different karstic caves and an open plain in front of the cave entrances. 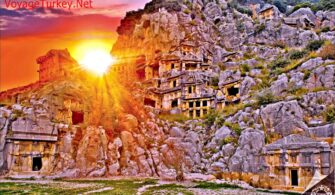 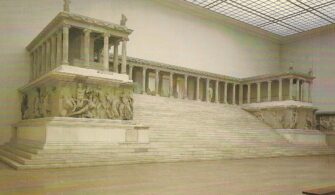 Altar of Zeus in Pergamon, Turkey: the Throne of Satan 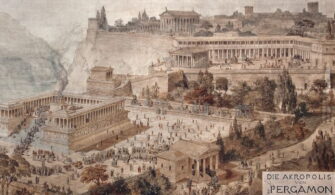 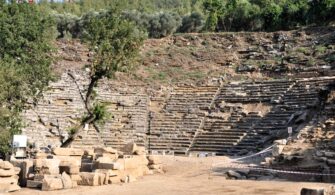 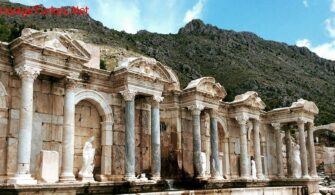 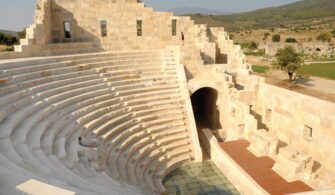 Patara: The Birth Place of Apollo and Santa Claus 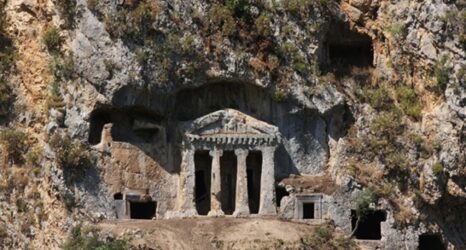 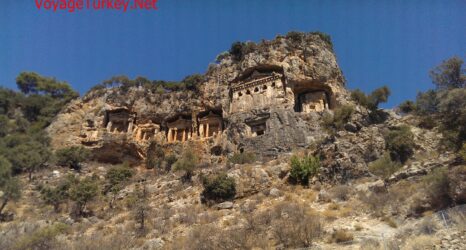 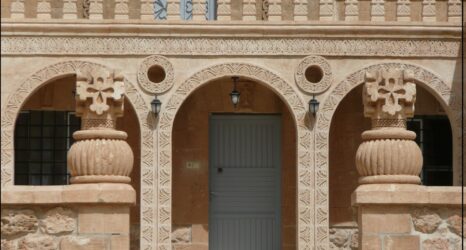 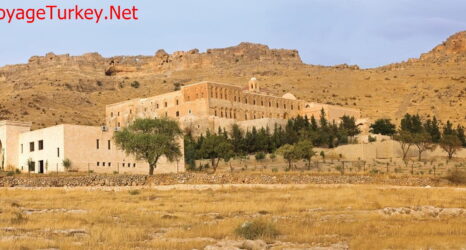 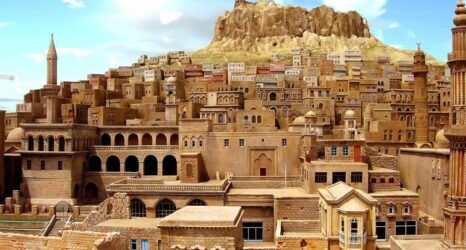 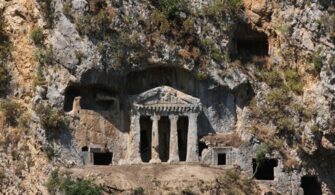