“Now, it’s the most beautiful of all cities…”

According the geographer Strabo, Smyrna was the most beautiful Ionian city in ancient times.

It believed that Smyrna, “the country of the sacred mother”,  was established in the third millennium B.C. at present day Bayraklı, by the Amazons, the legendary female warriors. According to another tale, it established by the Lelegs. It existed even before the arrival of the Hittites. 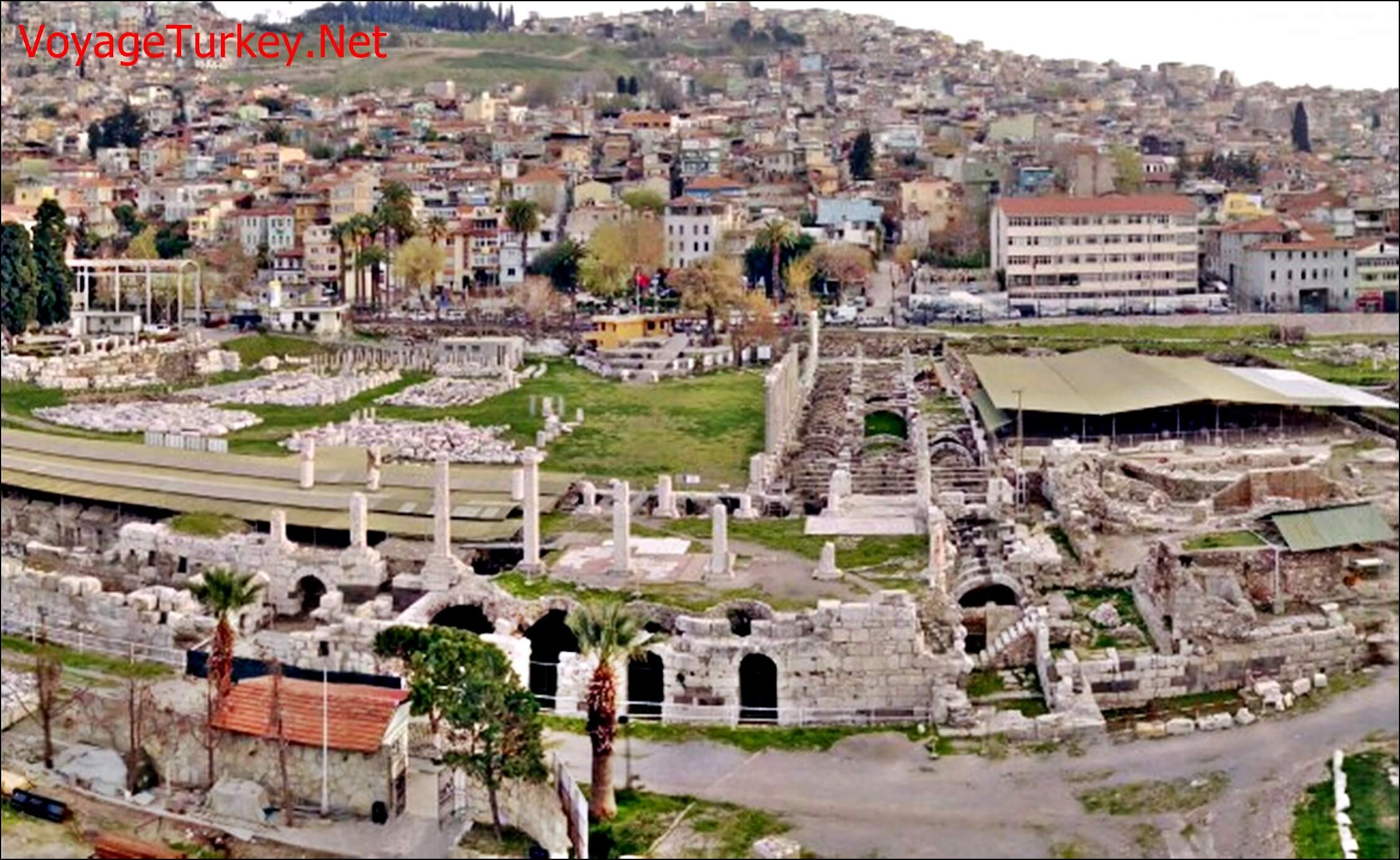 But, as a result of the excavations carried out by the Archaeological Department of the Aegean University, history of Smyrna was re-written.  Artefacts were unearthed at excavations (such as arrows made from flint stone, small statues of animals, reliefs and spoons made of fired earth) are dating back to the Neolithic Period. These are show us that Smyrna had been a continuous settlement for 8500 years.

Smyrna had fallen under the influence of the Hittite Empire by 1500 B.C. 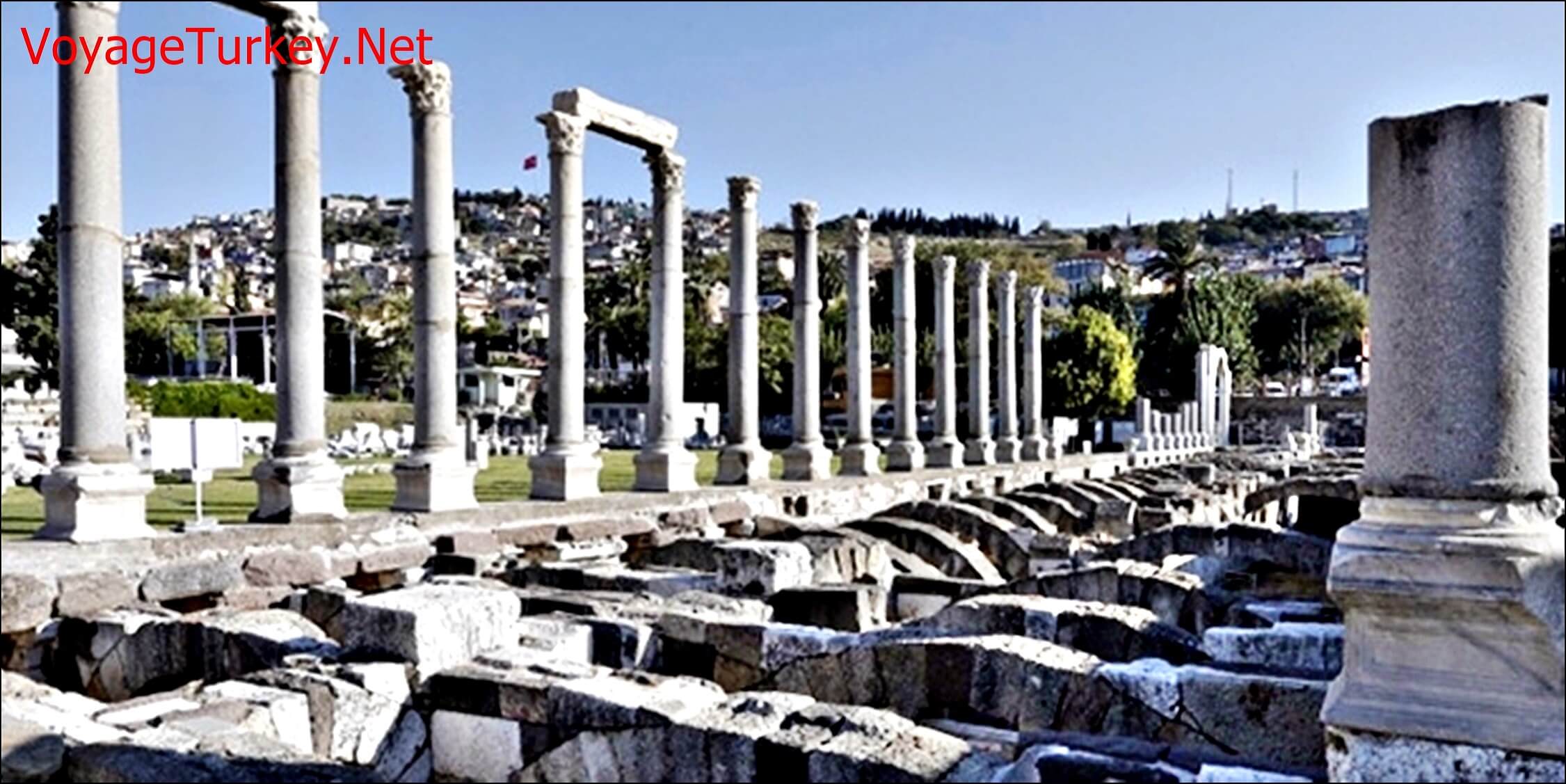 It was the most important cities of the lonian Federation, during the first millennium B.C. It is believed that Homer  the Poet resided here and Smyrna was the Homer’s inspiration.

Around 600 B.C. Lydian conquest of the city ended lonian rulling and importance of Smyrna. It remained little more than a village throughout the Lydian.

In the fourth century B.C., during the reign of Alexander the Great, a new city was built on the slopes of Mt. Pagos. Legend has it that Alexander the Great had a dream about a goddess Nemesis and  (according to the legend) Nemesis ordered him to re-build the City of Smyrna.

After the death of Alexander the Great, Smyrna was ruled by the Roman and the Byzantine Empire. 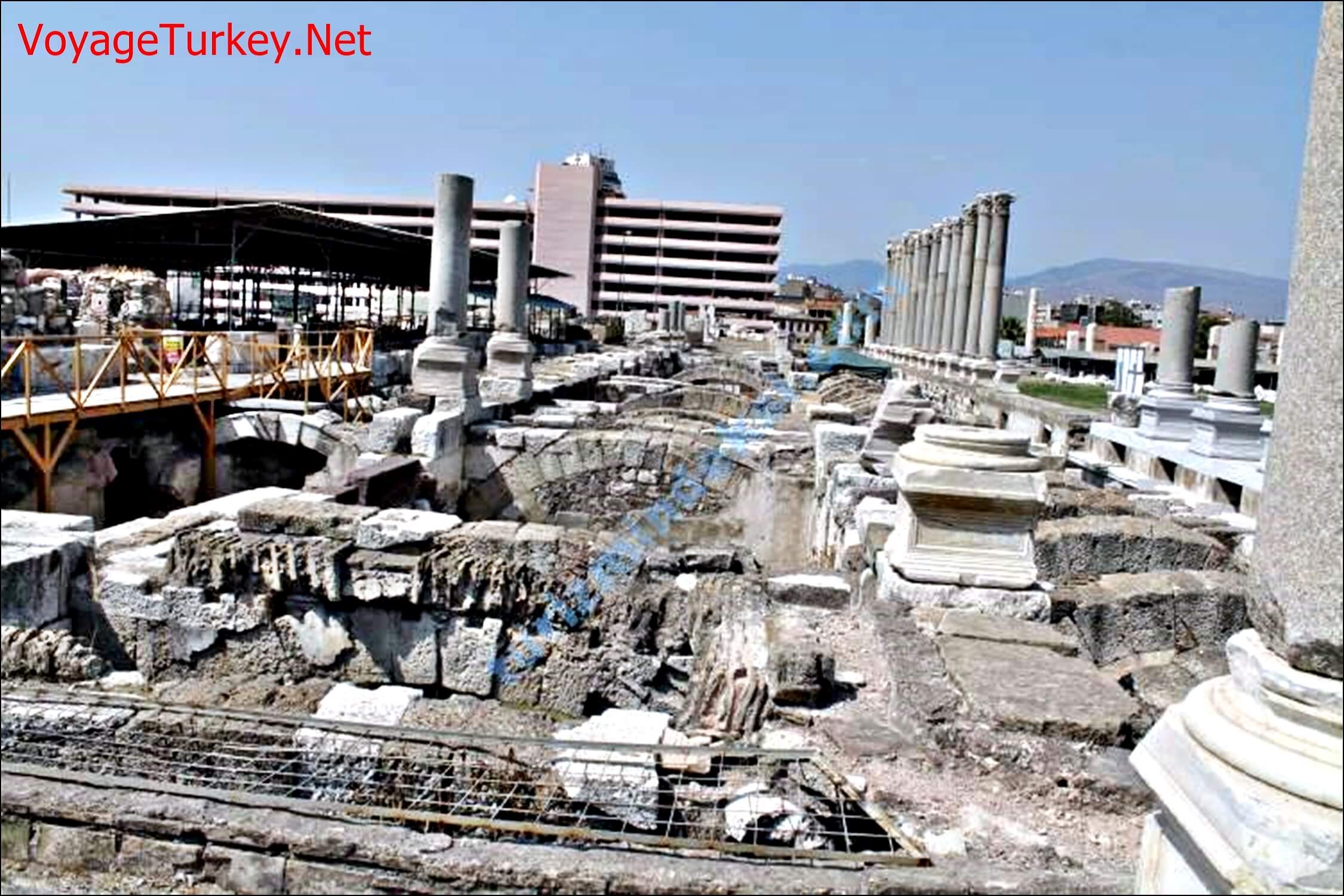 Later, Smyrna was captured by the Turks in the 14th century, and was ruled by Emir Çaka Bey, Aydınoğlu Umur Bey and the Seljuks and Ottoman Empire

The city is located on the Aegean Coast of Izmir.

As can be seen from the following, it is unlikely to perceive the Smyrna city plan as a whole, since a large part of the ancient city of Smyrna is now used as a settlement….

Buildings of The Smyrna Ancient City

Although there are many buildings and monuments in the original city, only the agora and basilica are evident today. Even a large part of the amphitheater building has been destroyed.

The Smyrna agora, which built during the Hellenistic era, is located on the northern slope of Mt. Pagos. There are important public buildings of the period around the agora. After the destructive 178 AD earthquake in this region, Smyrna agora totally rebuilt.

The Roman period basilicas, which pioneered Christian churches in terms of plan features, are a kind of courthouse in which the city’s legal works are seen. On the other hand, basilicas were preferred for the activities of the merchants and bankers who direct the commercial life of the city.

The basilica on the north wing of the agora has a rectangular plan measuring 165 x 28 m from the outside. According to their dimensions, the basilica of Smyrna agora is the largest known Roman basilica.