Besides being the center of the patriarchate, the monastery was the place of education for priests, monks, and diakos. Moreover, since the existence of the Assyrians, the tombs of 52 metropolitan and patriarchs have been buried in specially constructed rooms (tombs) in the monastery. 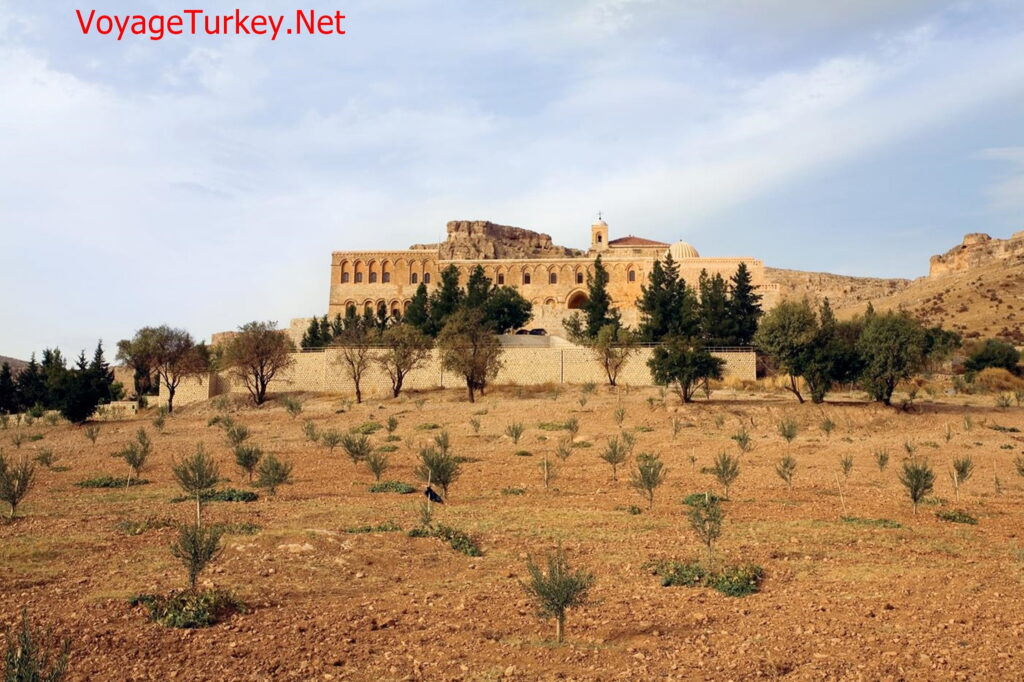 The monastery was used as the homeland of Syriac orphans and poor children and devotees.

The monastery has been called Deyrul-Zafaran since the 19th century. This name is given to the structure due to the saffron flower. According to legend, the saffron plant was used in the mortar of the building and the structure took its yellow color from this plant. According to another rumor, because saffron is very common around the monastery is called with this name. The word Deyr in Arabic means monastery, so Deyrul-Zafaran can be translated into Turkish as Safran Monastery.

The monastery is situated on a high hill overlooking the Mardin Plain, 5 km east of Mardin city center.

The date of the first construction of the monastery is not known. Syrian sources say that the Deyrul-Zafaran monastery was first used as a temple of the Sun and then as a Roman fortress before Christ. According to the Assyrians, Mor (Aziz) Şleymun turned this building into a monastery in 400 and brought the bones of some saints here. For this reason, the monastery was first named as Mor (Saint) Şeymun Monastery.

The monastery, whose name began to be heard in the 5th century BC, lived its golden age in IX and X centuries after many demolitions and repairs. During this period, many famous names have grown here.

In 1056, the Syriac patriarchal center moved from Diyarbakır to this monastery and remained there until 1091. The Patriarchate moved to another city for a period and was brought back here in 1293 and stayed there from 1293 until 1932.

Continuous additions were made to the monastery during this period. The monastery is still undergoing renovations and arrangements.

The Deyrul-Zafaran Monastery is a large complex of buildings dating to various periods.

The monastery is divided into two parts, old and new. There are four iwans around, two large and old cisterns in the middle. 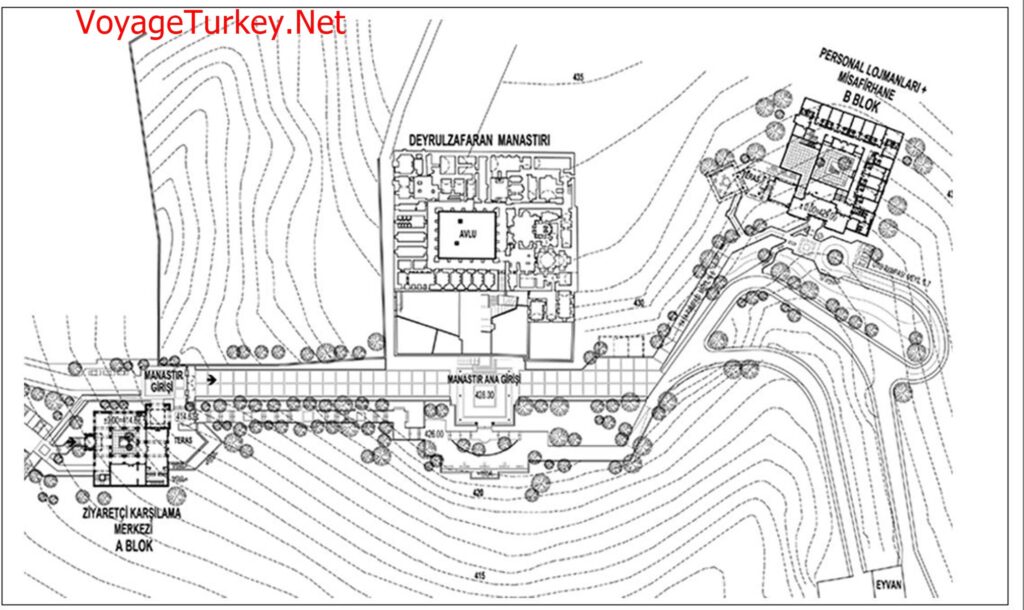 The eastern and western parts of the monastery are two-storey. The southern part has three floors and is relatively more beautiful.

The oldest place of the monastery is the large hall under the courtyard. According to the inhabitants of the monastery, this place was built by the sun worshipers before Jesus. It was a common tradition in Syriacs, one of the first communities to accept Christianity, to build churches or monasteries on pagan temples.

The Temple of the Sun is located in the eastern corner of the Mor (Saint) Hananyo Church and consists of two parts. Although the exact date of establishment of this structure is not known, it is estimated that it dates back to the period until the establishment of Mardin. The building was used as the Sun Temple at that time.

The structure consists of two parts. The entrance is 25 square meters. The second part is 51.5 square meters wide and has a remarkable ceiling. The flat and coarse stones that form the ceiling are geometric and placed against each other without the use of mortar, sand, lime and similar materials.

Although the purpose of the two sections on the east and south sides of the temple is not known, it is presumed to be an altar site.

Located on the southeastern side of the Mor (Saint) Hananyo Church, there are the bones of some saints as well as the graves of some patriarchs and metropolitans in the Monastery.

The domed building has a height of 10.5 and a width of 5.4 meters. It is estimated that this building was built in the 5th century, when the monastery was founded.

In this building, which draws attention to the stone motifs found in the interiors, 4 of the 7 niches belong to the metropolitans and 3 of them belong to the patriarchal tombs. 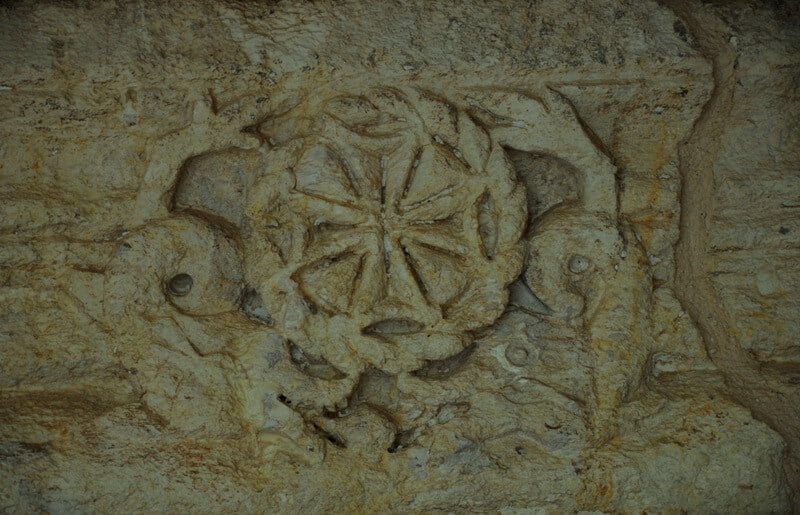 This Church was built between 491-518 AD during the reign of Byzantine Emperor Anastasius. The church, built by Syrian architects Theodosius and Theodore, has a width of 12.3 meters and a height of 17.7 meters. The area of ​​the church is 271 square meters.

This church is also called the Domed Church because it has a cross-shaped dome.

The pictures showing the various animal figures on the upper part of the exterior of the church are striking. Only one of the many frescoes on the inner walls of the church has survived. The only fresco that survived is depicted Aziz Hananyo, who had a major restoration in the monastery in 793. 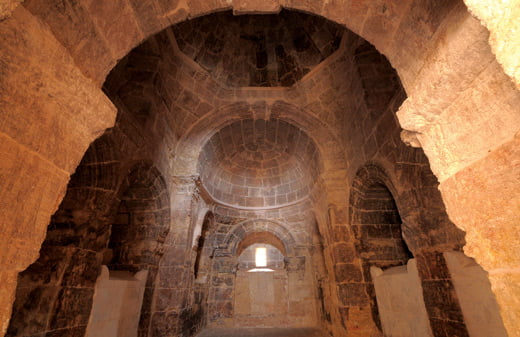 The Church of the Virgin Mary, located in the northeast of the main courtyard, is considered the first church of the monastery. During the reign of Patriarch Cercis II (1686-1708), part of the Church was restored. It has an area of 153 square meters. Byzantine mosaics are found in the apse.

The ceilings and walls of the church are made of baked brick in Byzantine style.

How to get to Deyrul-Zafaran Monastery