Cappadocia, meaning the Land of Beautiful Horses in the Persian language, comprises the provinces of Aksaray, Nevsehir, Nigde, Kayseri and Kirsehir. It dominates 40 kms area in between the districts of Avanos and Urgup located in Nevsehir. Major towns include Uchisar, Avanos, Urgüp, Derinkuyu, Kaymaklı, and Ihlara.

Nevşehir is at the centre of Cappadocia, and Ürgüp, situated 20 kilometres to the west, is famous for Saint Theodora (Tagar) Church and Pancarlık Church which have remarkable religious frescoes.

Most of the historical and natural assets in the region have been included in the UNESCO World Heritage List due to their value. 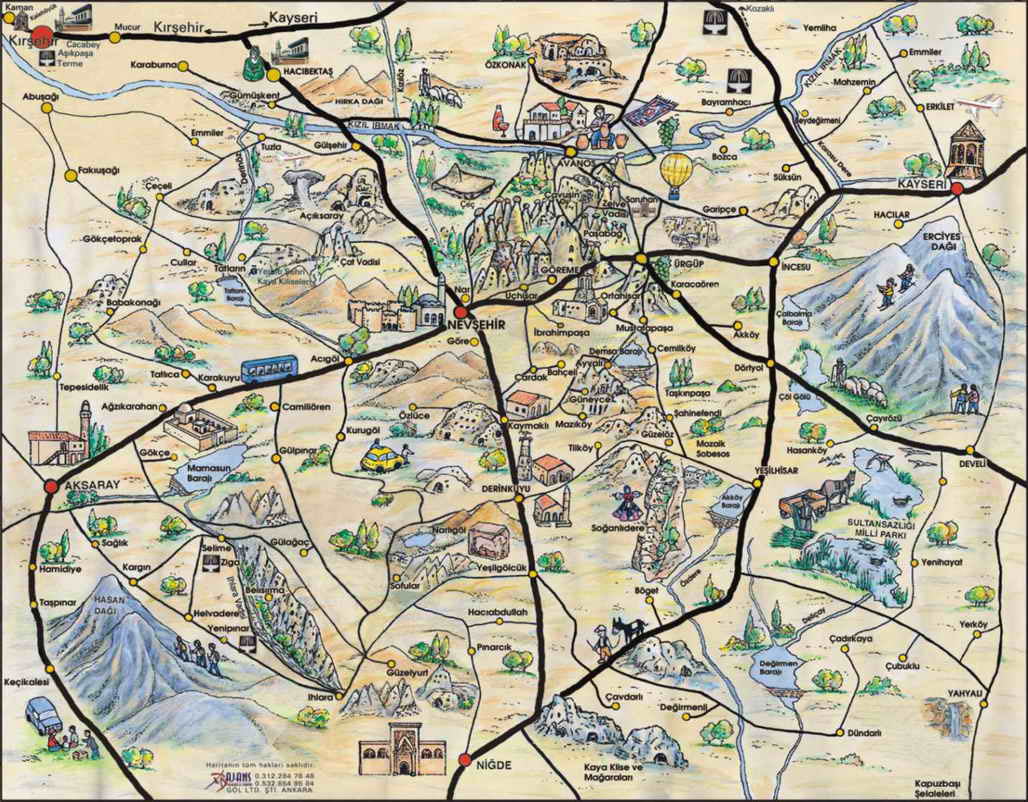 What are the Cappadocia fairy chimneys made of?

Cappadocia is made of volcanic ash and dust, hardened into stone which is called tuff, over millions of years. The fantastic landscape and the amazing shapes owe their formation to the special nature of this tuff. It is very soft and erodible and it is mixed with other harder volcanic materials. It has a natural structure which is rarely seen due to the activities of the volcanoes surrounding it millions of years ago.

How did the fairy chimneys formed?

Millions of years ago, the volcanoes of Erciyes, Hasandag and Melendiz mountains erupted and covered Cappadocia with a layer of tuff. For hundreds of years the region encountered unprecedented wind and water erosion. When the erosion process, shaping the valleys hit some of these harder materials such as basalt or ignimbrite, it starts to work its way around this harder stuff.

The erosion of the “tuff” (volcanic ash) that is abundant in the area, a relic of the series of many eruptions from 15 million years back, has created an amazing landscape here. Soil was washed away but the rocks able to withstand the erosion stayed behind in bizarre and wonderful formations. Over millennia, this tuff layer was croded, producing earth formations that, in turn, inspired cave art that has carried the imprint of ancient civilisations to our times. The result is a huge pillar underneath a small cap of harder volcanic rock. These are called “fairy chimneys”.

Today, with its surreal, fairytale landscape, Cappadocia is a place that offers astonishing natural beauty. Cappadocia is simply unigue and in the world there is only one place like this.

History of Cappadocia… When was Cappadocia built?

Written history of Cappadocia goes back to the Hittites but it’s known that the earliest human settlements in Cappadocia dated to the Palacolithic Period. It has served as an important trading post and bridge between the various lands of the Silk Road throughout its history.

In the Upper Miocene epoch, the volcanoes under the lakes erupted and spouted lava. The lava formed a plateau, a landscape that smaller eruptions constantly altered.

During the Upper Pliocene epoch, the Kızılırmak River, together with lesser streams and lakes, cut deep into the tuff plateau, and the region gradually began to take its present shape. Wind and rainwater flowing down the sides of valleys eroded the tuff structure, and sculpted the formations known as “fairy chimneys’. 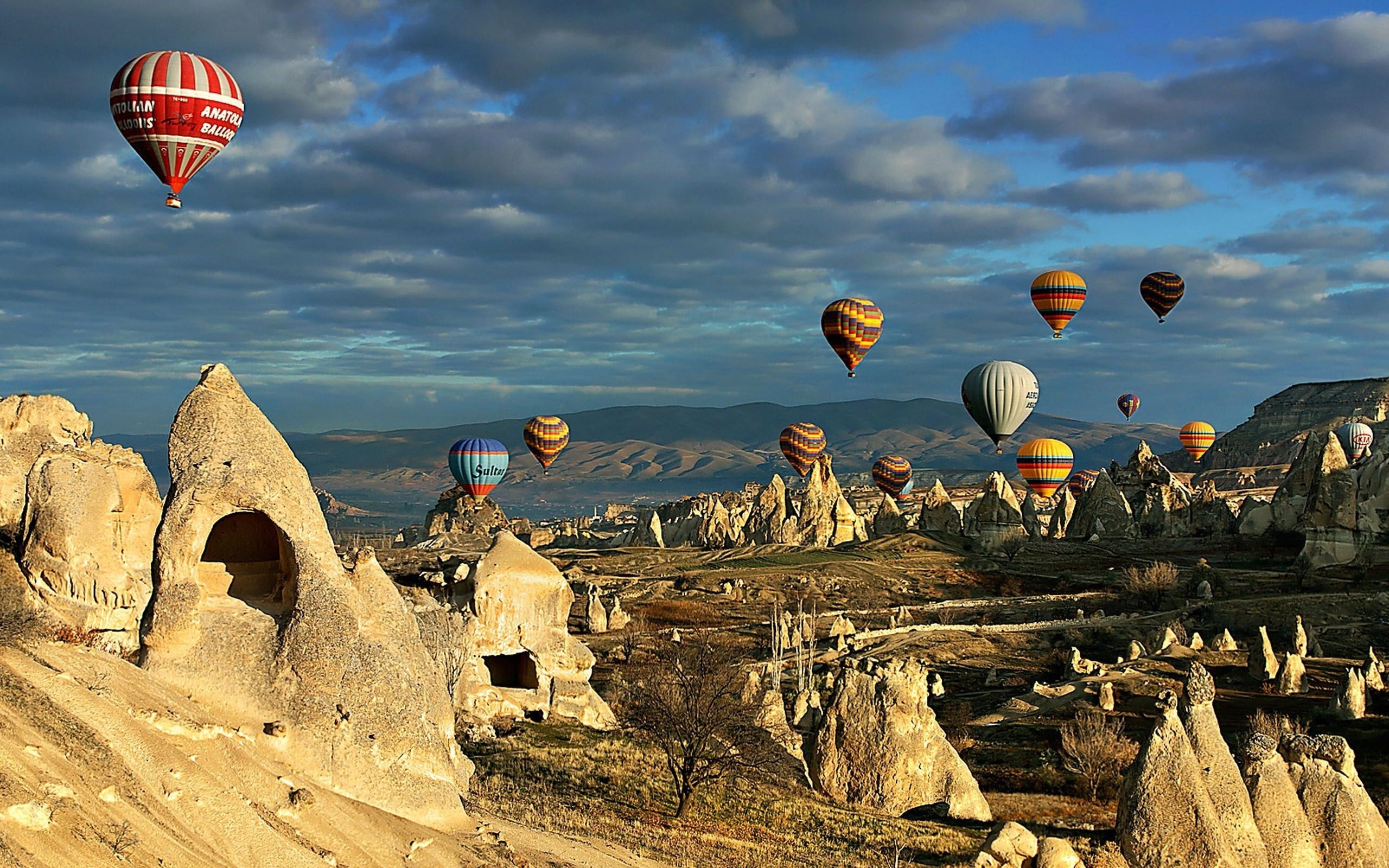 The principle type of “fairy chimney” in Cappadocia is the conical rock structures topped with a hat, either a cone or a mushroom shaped cap.

The early Hattian settlers were followed by the empires of Hittite, Phrygian, Persian, Roman, Byzantine, Seljuk and Ottoman, and each left its mark on the enchanting landscape of Cappadocia.

Cappadocia, situated on the principal trading routes of the Silk Road, was a meeting place for different philosophies and religions, each of which left a historical and cultural impression on the region.

What is Cappadocia known for? Things to Do in Cappadocia

Cappadocia is best known for its fairy chimneys, unique landscape, churches and houses carved into the rock and underground cities and churces.

Historical Places and Plces to See of Cappadocia

Subterranean Cities and Churches in Cappadocia

Usually, tree days will be enough for a visiting to Cappadocia. During this time you can go on a hot air balloon ride, visit all of the big sites, undergrund cities in this region, do a little hiking, explore some caves,

When should I go to Cappadocia?

Cappadocia region is extremely hot in the summer months and the winter months are also extremely cold, so the best season for visiting Cappadocia is the spring and autumn months. As the months of April and November are a bit more rainy and windy, the most suitable months to visit Cappadocia are May, June, September and October.

Carpet and Kilim Weaving in Cappadocia

What to Eat and Drink